In the pandemic changed society, the long-awaited opportunity for vaccination has appeared – the largest vaccination point has opened in pavilion 6 of the Zagreb Fair. The observational documentary “Vaxers” follows individuals from the most important organizational sectors such as security guards, administrators, doctors, epidemiologists, nurses and emergency workers. The film pays equal attention to the citizens who came to be vaccinated, regardless of whether they came to the vaccination “in pairs” or started communicating with complete strangers with whom they were united by a common term of vaccination. In the chaos that accompanies the film, all of the painful points of post-transition Croatia emerge, from the completely ruined trust in knowledge, science and institutions of the system to the eternal need of the “little man” to fight for something “out of turn” or “through a connection”. The ultimate ambition of this observational film is to raise the question of whether we still exist as a society or have we become a group of disoriented individuals whose only current consolation may be that the current problem they face is not endemic, local but something that has befallen the world. 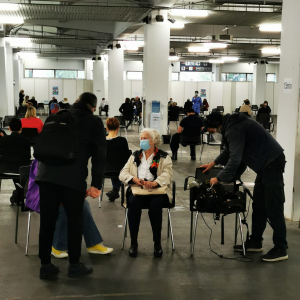